Many companies in recent years have pivoted to open floor plans within their offices, believing they boost recruitment, productivity and collaboration. But recent studies by Harvard Business School researchers suggest that isn’t necessarily true.

“Rather than prompting increasingly vibrant face-to-face collaboration, open architecture appeared to trigger a natural human response to socially withdraw from office mates and interact instead over email and IM [instant messenger],” according to the study, which tracked two Fortune 500 companies working in both a traditional cubicle-office format and then in an open space.

The study surfaces as numerous Connecticut employers, and others nationwide, have increasingly adopted open floor plans, in part to remain on the cutting edge. Recent examples in downtown Hartford include Travelers, Aetna, Conning and Virtus Investment Partners Inc., which have all pushed their offices further into open concepts. Several Greater Hartford architecture firms rebutted the Harvard study, arguing that open offices ramp-up workplace efficiencies, technology use and catch the eye of Millennials. Some questioned scenarios that were observed in the study, and others say fewer walls means less cost.

Clients, architectural experts say, regularly share those positive viewpoints after moving into their new open spaces, which typically also offer enclosed flexible areas to preserve privacy. Hartford’s Crosskey Architects is one of many local firms that has tested an open-plan concept at its own headquarters.

In 2016, Crosskey relocated from a traditional office to an open space in downtown’s Stark Building at 750 Main St. Laura Crosskey, an architectural designer for Crosskey, said the firm encourages clients to tour their downtown space so they can experience the functionality of open floor plans.

Crosskey said the firm’s move to an open office has been well-received by its 25-member staff, who more regularly collaborate due to a lack of barriers between desks. “The ‘open office’ term is used as if it’s one thing,” she said. “We have learned that it’s really important to have those alternative working spaces that are enclosed.”

Infinity Group, an office designer with over 20 employees, recently moved into a renovated space in downtown’s Stilts Building at 20 Church St.

Infinity has dubbed its downtown Hartford office “the studio,” given that the newly renovated, 3,500-square-foot space is open to daylight, has scattered, unassigned seating and a mixture of private and open work areas.

Peter Schaller, Infinity’s Marketing Director, says the firm now works “more fluidly” together and is better equipped to brainstorm on projects and have additional access to technology.

And the relocation and rebuild wasn’t done hastily, said Blake Leonard, Infinity’s Vice President of Project Implementation. Infinity, founded in Manchester more than a decade ago, dedicates about 70 percent of its work to office redesigns.

“We wanted to design an environment that fits our work style, which has changed a little,” Leonard said. “Based on the work we do, it has been enhanced given the environment we have here.”

Productivity also diminishes in the face of open office architecture, the study found, because some people are fearful of interacting in front of a large audience of peers. Those employees may just look up and see that a person is at his or her desk, and send an email.

“Such negative psychological effects of open offices conceivably may lead to less, not more, interaction between those within them, reducing collaboration and collective intelligence,” the study says. Still, to the displeasure of Harvard researchers, open-plan offices are the new norm for an increasing number of companies, experts say. Balance, though, is the linchpin… 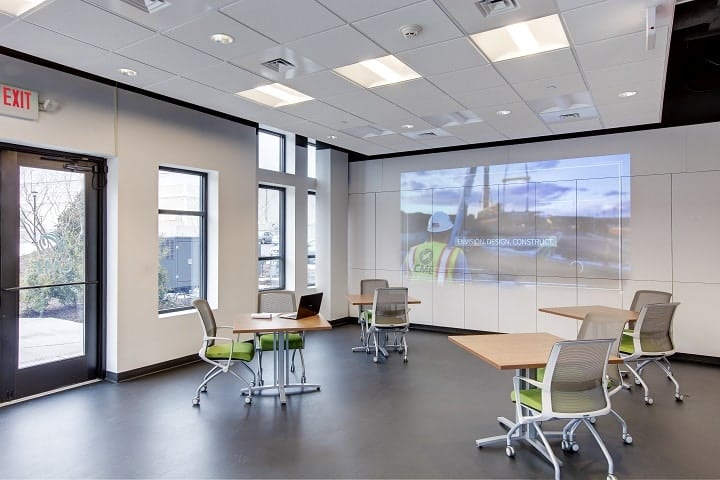 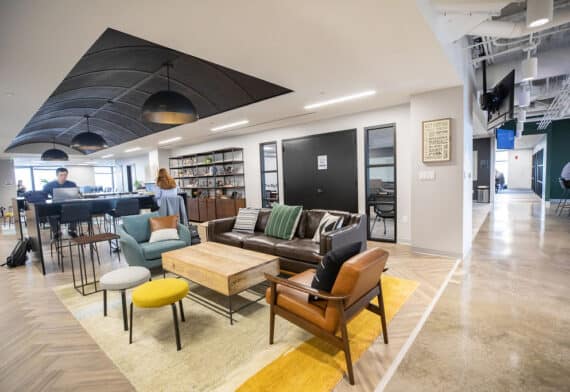 Resimercial in an Office Setting